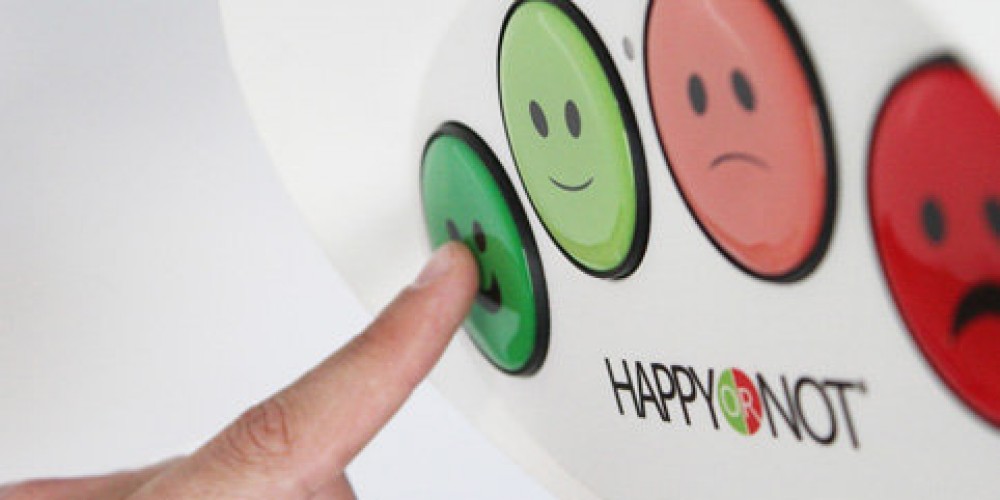 Can workplace satisfaction be successfully measured with emojis?

Sports Direct recently introduced a staff surveying system to its Derbyshire warehouse operation, asking its 3,500 employees to press a touchpad with either a happy or sad emoji face, to indicate their satisfaction with working conditions.

It’s a similar system to the one that you often see in public service stations, and it might seem like a small step taken far too late. The company came under serious fire after an undercover investigation by The Guardian last year revealed poor conditions and extremely low morale. This later resulted in a parliamentary enquiry, which discovered pay below minimum wage, and constant fear of sacking for minor mistakes.

According to trade union Unite though, the surveying move has also taken a sinister turn. Unite claims that warehouse staff who say that they are unhappy with working conditions are being identified by their fingerprints, and asked to explain their issues to the management team.

The union’s assistant general secretary, Steve Turner, said, ‘Put yourself in their shoes. Would you risk having hours withheld, possibly losing your job and being called in by management because you indicated dissatisfaction with your work environment?’

He went on to describe the survey as ‘a bogus exercise to gloss over past failures and some of the problems’.

A spokesperson for Sports Direct said, ‘We believe these comments by Unite do not accurately reflect the position at Sports Direct. We have a range of different measures in place to protect staff. These include a comprehensive system for staff to provide detailed feedback via an initiative called Your Company, Your Voice, plus a workers representative who attends meetings of the board’.

It’s clear here that there are issues at play that go much deeper than trying to measure employee satisfaction with emojis. Though it’s vital to understand the mood of your workforce, such exercises can’t be reduced to smiley and sad faces – and they’re definitely no sticky plaster for hiding deeper issues.

Sports Direct might be an extreme example, but there are often no quick solutions for having a positive impact on workplace issues, and tactics always need to be part of a wider strategy for meeting business goals while nurturing your staff.

Instead of being quick to criticise Sports Direct though, many business owners would be better off critically analysing their own processes, and looking for areas where improvements could be made. It can be the difference between ticking the boxes, and being a truly exemplary organisation.

Fixing issues before they spiral out of control and become a disaster is going to save you a whole load of time, money and hassle in the longer term. Give us a call today, and we can arrange to carry out a no-obligation review or even just a chat about how we could help.